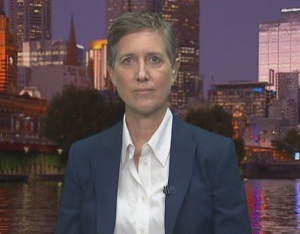 Sally McManus is the hero of workers. Turnbull is welcome to try to villainise her, but in doing so, he’s only making himself the enemy.

In her first television interview as head representative of people who work, McManus was involved in what media-insiders call a ‘gotcha moment’. Courtesy of the get-me-a-gotcha-moment-in-place-of-any-useful-political-analysis-queen, Leigh Sales. In their version of events, McManus was in hot water for backing the safety of workers at any cost, even if that cost is breaking laws designed to help employers shirk any responsibility for protecting people who work for them.

Right wingers squealed in delight when Sales drew supposably controversial comments out of McManus so early in the piece. The attacks came thick and fast from all the obvious places, including many journalists, who tut-tutted about law-breaking as if the law-breaking in question was home invasion or carjacking. Even those from Fairfax, who were more than happy to illegally strike in protest at their own colleagues being sacked, apparently can’t see the irony of criticising workers who do the same thing when a colleague is killed. Christopher Pyne, jumping on McManus like a seagull on a chip, called on her to resign. Turnbull, grasping for something to divert from his own failures, said he couldn’t work with her.

A year ago, this whole episode would have been yet another predictable, not worth mentioning, union bashing media-beat-up. But things have changed in the past few months. People have woken up to wealth inequality. Australia saw this wake up contribute to Brexit and the election of Trump. Closer to home, we’ve had One Nation pop up in Turnbull’s double dissolution, only to be over-egged and come crashing back down in the WA election, where, low and behold, Labor achieved an 8% swing in their primary vote without any help from minors.

Throughout this time, Turnbull’s government continues to be a mixture of insipid do-nothing indecision, scandal and destruction, infighting and chaos, ideological bastardy and economic incompetence while they sidestep from one policy disaster to the next. Amongst the attacks to Medicare, the undermining of welfare through the Centrelink debacle, the failure on energy policy, the distractions from fringe fundamentalists such as anti-marriage-equality and repealing hate-speech laws, there is one policy which stands shiny and red as the most detestable, a pimple on a bum of failure: an attack to wages through a cut to penalty rates. This decision was the nail in Turnbull’s coffin. Commentators and Federal Liberals can claim all they like that the electoral result in WA was a result of local issues. But there is absolutely no doubting that a cut to wages saw voters melting off Liberals like sweat from Turnbull’s, and Hanson’s brow.

Let’s get something clear. Wages are the central concern of the electorate. Yes, most of us have other concerns, including climate change, education, healthcare, infrastructure, housing affordability, energy policy, immigration, just to name a few. But first on Maslow’s Hierarchy of political needs for left-wing and right-wing voters alike is an economic indicator which is being felt personally in homes from Broome to Launceston, from Townsville to Bankstown: record low wage growth. To put it bluntly, workers aren’t paid enough for the productive labour they contribute to the economy. There is plenty of money being made. It’s just not reaching those who create it.

The electorate knows this. They might not be able to pinpoint exactly what the problem is, but they feel the anxiety of having to do more with less. They are working harder. They are paying more for housing, groceries, petrol, energy bills, healthcare and education. But they are not getting the hours they need to cover these costs, nor the pay-rises they deserve, to show how their contribution to profit is valued. Their jobs are too often casual and insecure, their wages stagnant and their lives feel stationary.

This tension and anxiety means the relationship between worker and employer, between labour and capital, is fraught. In turn, the relationship between those who represent workers – unions – in this case – Sally McManus, and those who represent capital – Turnbull, Pyne, big business, business lobbyists, Liberal donors, is more-than-usually-difficult.

When Turnbull said he can’t work with McManus, he was admitting he can’t work with workers. This isn’t a new state of affairs. Turnbull has never done anything positive for workers. Instead, he defends the employers who, as well as preferring to reward shareholders instead of workers, constantly fight for lower wages and less protections for workers. The penalty rate cut was just the latest in a long line of anti-worker policies rolled out by the Liberal government, including cuts to social and environmental policies which hurt all of us, worker or not.

The political environment has changed in the last 12 months. Unions have been framed as the enemy for so long that the Turnbull government think they’re on a winner when they find a stick to beat unions with. What they’ve neglected to realise is that when they bash unions, they bash workers. Workers are sick of being the victim of Liberal governments. Workers are sick of being the victim of big business lobbying, which results in them taking home a shrinking share of the profits from their work. When Liberal governments bash unions, workers don’t see a hero fighting against a villain. They see a villain threatening their hero. With wage growth at record lows, workers need a hero. They have one in Sally McManus. Anyone stupid enough to fight the hero of workers, better be ready for an army poised to join their hero into battle.