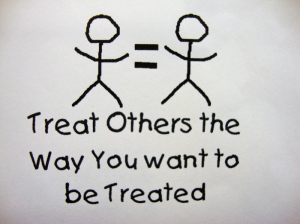 Progressives don’t need a new narrative. We already have one. We just need to stop neglecting it.

Remember when you were a child and you used to ask your mum for a new toy and she’d say ‘you have plenty of old toys that you hardly ever play with, why don’t play with them?’ Sometimes you would. After going through the old toy box, you’d rediscover an old favourite – a Game Boy that just needed new batteries, or a skateboard you’d forgotten about over winter which just needed a dust off and could entertain you for hours. That’s what we need to do with the progressive narrative. We need to dig it out of the back of the cupboard, brush it off, polish it up for modern day usage and all sing it from the roof tops. We don’t need a new one. We just need to up-cycle the old one.

I have read so many articles recently by fantastic left-wing voices and by impassioned people who care deeply about defeating dangerous ideologues like Donald Trump who will make the already bleeding wound of inequality hopefully not irreparably worse. Owen Jones asked the question: ‘Can the US left craft a populist alternative that convinces the millions of Americans who are angry and despondent about a society rigged against their interests? The future of the American republic is uncertain – and it may depend on the answer to that question’. Rutger Bregman suggests that too often it ‘seems as if leftists actually like losing’ and that the old-school underdog socialists are ‘Dull as a doorknob. They’ve got no story to tell; nor even the language to convey it in. Having arrived at the conclusion that politics is a mere matter of identity, they have chosen an arena in which they will lose every time’. Even though Bregman has some fantastic policy ideas, as usual, he hasn’t answered his own question: ‘what will this progressive story look like?’. So, once again, we’re all left feeling around in the dark for a unified thread to hold all our well-meaning ideas together.

In Australia, a divided progressive movement is hampering progress. Rather than fighting for and with Labor, the party of the working class, many of the more privileged progressives, who mostly live in inner cities and don’t identify as working-class, nor see any point in joining a union, have leached away to a new toy: The Greens. This leaves progressives fighting amongst ourselves with the battlelines drawn over identity politics versus labour movement priorities, and the old progressive narrative discarded by the side of the road.

I read with a mix of amusement and annoyance that ‘200 of the most exciting young people’ who were invited to attend the ‘Junket’ conference are not just fed up with Labor, but are also fed up with their newer toy, The Greens, and instead showed ‘strong support for some kind of new organisation, potentially even a political party… to channel the frustration felt by young people, and other sections of the population’. Maybe I’m just tetchy that I wasn’t invited, because I’m clearly not young or exciting enough, but the idea that young progressive Australians aren’t content to join the Labor Party and make it their own, or even to join the Greens (because that’s less work than changing the Labor Party), no, they are now wanting something brand new again, to wipe the slate clean, yet don’t seem to be able to actually explain what it is their new party would be except that it would ‘un-fuck politics’ (their words not mine). Well, that just shows how we got into this mess in the first place, doesn’t it?

That’s the story we should be telling. Try it on. It goes with everything you want and everything I want too. And if it sounds familiar, it’s probably because you’re already using it and just didn’t realise it was right there in front of you the whole time. Now, let’s stop wasting time looking for it and get to work using it.

Watch this space for more suggestions of how this narrative works in practice.