Choosing aunty over mum and dad 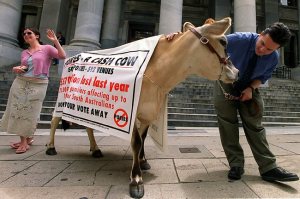 Yes, this is a simplistic metaphor, but you get my point. The electorate’s, and coincidentally media’s growing love for any candidate who doesn’t come from a major party is akin to children picking their cool Aunty Heather over their parents in a contest of who is the better caregiver. Sure, the whole idea of picking one parent over the other is unrealistic, but an election is basically a contest between who is going to care best for the country; a Labor government or a Liberal government, and in this election, it appears, in South Australia, at least 1 in 4 voters chose neither.

My favourite cognitive linguist, George Lakoff, who studies political metaphors, is responsible for the idea that left wing governments represent mothers – based on nurturing values, whereas right wing governments represent fathers – based on authoritarian values. Using this metaphor, I am heartily sick of hearing people say ‘a pox on both their houses’, ‘I don’t like either party’, ‘the establishment is broken’, ‘our cool aunty or fun-loving uncle Xenophon / Greens / Hanson / Lambie etc will look after us better than our boring old parents’!

The thing is, as fun as it is to spend a few hours a week with cool aunty or fun-loving uncle, they’re not your parents. They don’t have to pay the mortgage, organise your school lunch box or follow-through on promises to buy you a pony, which then has to be looked after for its entire life. They can buy you an ice-cream once every three years and apparently that’s all it takes to make some voters happy. The messiness of actually having to parent, to form government, to take legislation to parliament, to develop policies in the national interest, to balance a budget, to deal with the constant media narrative of ‘major-parties just aren’t credible’ is a completely different kettle of fish than appearing on the TV for the odd sound-bite and never actually having to give away anything about ideals or vision of policy positions BEFORE THE ELECTION. The media helps facilitate such Teflon-campaigning.

Before I get jumped on as being unfair, I am happy to acknowledge that Australia’s cool aunties and fun-loving uncles have been good to us over the last three years. The cross benchers in both the lower and upper houses, including Greens, McGowan, Wilkie, Lazarus, Xenophon, Lambie etc, did manage to pretty much scuttle the Abbott and Turnbull budgets three years in a row, protecting us from the worst of their neoliberal agenda. I have a great love for Tony Windsor and Rob Oakeshott who helped Gillard’s productive minority government achieve many great policy outcomes. But the thing is, if that’s these people’s roll – if they’re here to mediate the odd policy, to block the very worst, to negotiate some pork-barrelling for causes they care about – that doesn’t make them pure and it certainly doesn’t mean they’re undeserving of scrutiny during the campaign. In fact, it could be argued, it’s even more important to know where they stand if they have the power to determine what happens in parliament. It also doesn’t mean the majors, who are doing the hard-yard policy work of government or opposition – are somehow automatically ‘not-credible’, just because this work is harder, messier and therefore easier to criticise. The work of a parent is different from the work of an aunty or uncle. I think it’s time the media stops the childish, simplistic narrative of ‘majors bad, minors/indies good’, to better educate the electorate exactly what they’re voting for, no matter who they are.

The absolutely worst thing that can happen to the reputation of cool aunties and fun-loving uncles (or in some cases, racist aunties and the gun-loving uncles) is that they’re given the responsibilities of a parent. For example, if Xenophon’s lower-house MP, Rebekha Sharkie, is responsible for making-or-breaking key policy outcomes, such as protections to Medicare, climate change policy, school funding, corporate tax cuts, penalty-rates, trade deals, the continuation of paid-parental leave, industry-protection, funding to childcare rebates and any manner of real world situations which actually impact on the every-day lives of the Australian people, no amount of stunt-making and Teflon coverage by the media is going to protect NXT from the scrutiny they should have had before the election.

I met many Xenophon voters and volunteers throughout the course of the campaign in South Australia and without fail, the majority of them justified their support of Xenophon with a statement such as ‘he’s keeping the bastards honest’, ‘the majors are corrupt’ and so on and so forth. But when you dig a little deeper, there is very little policy behind this supporter base, very little detail about what exactly the Xenophon candidates stand for, and no unity in their positions. Most of them have little to no idea how Xenophon himself voted in the previous two terms because, frankly, they don’t seem to care.

Taking a position is dangerous. Aunties don’t have to force their nieces to brush their teeth. Remember what happened to the Democrats when they sided with the Liberals to bring in a GST? What sort of backlash could Xenophon expect by being a policy king-maker, when his reputation is for ‘doing politics differently’, which in his case, mostly means ‘flying under the radar of scrutiny and getting away with doing whatever he feels like at that moment’. We already know his voters are disillusioned with the traditional business of politics because that’s why they voted for his party. What happens when that disillusionment is directed at the real-world decisions his party will now be forced to take a position on? What happens when voters realise Pauline Hanson isn’t going to be able to arrange a racist-Royal-Commission into Islam or that her climate-change-denial doesn’t stop Australia taking action against climate change? It’s all fun and games until aunty and uncle have to disappoint the kids.

The next three years are going to be fascinating to watch. There has never been a more exciting time to be scrutinising independents and minor parties! As I’ve said many times since Saturday afternoon: PASS THE POPCORN.