The last three years of Liberal National government have been absolutely nightmarish. Their ideological wrecking-ball has crashed through every imaginable progressive policy area. They have been ferocious in their quest for small government and a neoliberal economy that benefits only the wealth and privilege of the tiny few at the top end of town.

Devastatingly, and we-need-a-stronger-new-word-for-frustratingly, this is not happening. 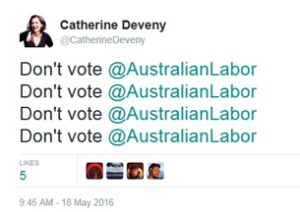 Catherine’s tweet mirrors the campaign of the Greens Party and Richard Di Natale, who, on the first day of the election, proclaimed that his priority this campaign is taking Labor-held inner-city Sydney and Melbourne seats such as Anthony Albanese’s seat of Grayndler, Tanya Plibersek’s seat of Sydney and David Feeney’s seat of Batman.

This week, the Greens joined Liberals in criticising Feeney when it was revealed he had a second property which hadn’t been declared, criticism which spectacularly back-fired when Di Natale was found to have done the very same thing. Add to this that Di Natale’s family paid au pairs a pittance for caring for his two children as live in house-keepers, it was not a good look for a man claiming to be pure after spending a week attacking Labor over penalty rates. All in all, it’s been a messy mud-slinging week of tit-for-tat between the Greens and Labor, helping again to take the spotlight off the real challenge for progressives this election; beating the Turnbull government.

Now, of course I’m not saying Greens don’t have the right to run against inner-city Labor candidates and to partake in dirt-slinging campaigns attacking Labor, because they have a right to do whatever they want in a democratic election.

While the Greens focus on defeating Labor by putting their limited time, money, volunteers, media opportunities, campaign strategies, dirt-slinging and apparently-star-candidates (which is questionable in the case of Casey who admits to loving the idea of an Abbott government, at least he’s honest) into defeating Labor MPs, and while the likes of Deveny and thousands of other Greens supporters spend all their time and energy ranting and yelling about how bad Labor is and how evil Labor is and how nobody should ever vote Labor ever and how if you do, you’re a heartless-asylum-seeker-hater who deserves to be spat at on the street, the Liberals are absolutely loving every minute of it.

The Liberals are loving that Labor has to spend time, money and volunteers in safe Labor seats when Labor’s time, money and volunteers would be more effectively spent campaigning in marginal seats held by Liberals. The Liberals are loving the calls from the Devenys for people not to vote Labor, because the opposite of not voting Labor in our preferential electoral system is voting Liberal instead. Unless you put the Liberals last – or at least below Labor – you are effectively voting for them.

And do you know what the Liberals love even more? They love when the Greens are so desperate to beat Labor, that they do preference deals with Liberals. Preference deals which help the Liberals get more votes, thereby increasing Liberal’s chances of winning more seats than Labor and winning a second term of government. What’s not to love!

This willingness by the Greens to do deals with Liberals to help them defeat Labor comes on top of the Greens kindly helping the Liberals change senate voting laws, potentially increasing the chances of a Liberal senate majority, and reducing the vote for independents and minor parties who were instrumental in blocking not one, but three horror-Liberal-budgets, saving the country from some of the worst of the Liberal agenda.

To Greens who have already started yelling at their screens ‘THERE IS NO PREFERENCE DEAL’, which I have had yelled at me on Twitter approximately 12,000 times since the apparent preference deal was written about by Chris Wallace in the (firewalled) Saturday Paper last weekend, please read the article. For those who can’t access it, here is a summary: Victorian Liberal Party President Michael Kroger is likely to direct preferences (quote from article): ‘to the Greens in five Melbourne and Sydney seats’ in a strategy ‘to divide and rule the progressive side of politics’ (my emphasis). In return, the deal (quote from article) ‘would see the Greens issue “open tickets” that don’t direct preferences in a number of vulnerable marginal Liberal seats. While not a “swap”, the preference deal would subtly, but in extremely tight contests potentially decisively, affect the result by shifting the two-party-preferred vote a few vital percentage points’. Note, ‘affect the result’ means affecting the result in both the marginal seat AND THE WHOLE ELECTION, which is predicted to be tight.

Has this deal been confirmed? No. Are the Greens denying it? Yes. But they would wouldn’t they. How will the public ever know if such a deal was made? The Liberal how-to-vote card in five Melbourne and Sydney inner-city seats will direct preferences to Greens ahead of Labor. And there will be some Greens open-ticket how-to-vote cards floating around the place, which the Greens will no doubt claim just miraculously, coincidentally, I-don’t-know-how-that-happened-because-it-certainly-wasn’t-our-intention-to-help-the-Liberals-slippery-little-suckers-weasle-words and there MOST DEFINITELY IS NOT A DEAL! So we will see. And until we see, I will remain very very nervous about such a deal, because, even though of course preference deals happen all the time and they’re just a reality of political life, this particularly dirty deal, as Wallace has pointed out, could be the difference between a defeat and a second term for the Liberal government.

Everything is at risk: Gonski school funding, climate change policy, accessible higher education, workers’ rights, Medicare, housing affordability, national infrastructure such as public transport and the National Broadband Network, and I could go on on and on.

I can’t imagine how privileged your life would have to be, sitting in an inner-city Café, drinking a luke-warm Latte, to not have a care in the world except maintaining your comfortable spot on your high horse, screaming at anyone unlucky enough to come into your path that the Labor asylum seeker policy is THE ONLY THING THAT MATTERS THIS ELECTION. And even if no other policy mattered to you, if you really were so privileged that you didn’t care about any other progressive policies because you hadn’t been hurt by, nor cared if your community was hurt by Liberal policies, and all you really did care about was immigration policy, how on earth can any sane, compassionate person possibly equate this one-and-only-care with the risk of continuing the Liberal’s asylum seeker policy, which results in zero chance of resettlement for refugees, thousands and thousands fewer refugees given a chance to live in Australia and complete and utter disregard for the safety, health and wellbeing of the poor, desperate people living in indefinite detention. And not only risk this outcome, but betters the chances of it through a preference deal? Really? You’d help the Liberals keep their asylum seeker policy if it meant stealing a few seats off Labor? Really?

If the Greens continue with their ‘beat Labor at all costs’ campaign and do make a deal-with-the-devil to win inner-city Labor seats, and Labor do manage to win the election regardless, this progressive win will be despite the Greens. Because the Greens aren’t just not helping. They’re determined to be a hindrance to Labor and therefore are effectively giving a leg-up to the Liberals. How they live with this reality, and vote for it, is beyond me.