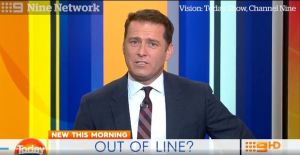 You can’t blame the Liberals and their communications strategists for believing the demonization of refugees is a vote winner. The rise of Pauline Hanson, who stole votes from the Liberals, Howard’s success with Tampa and ‘children overboard’ in 2004 and Abbott’s ‘stop the boats’ election win in 2013 have given the Liberals a sense of security in their boat-people-threaten-national-security narrative, which they roll out whenever they have poll-insecurity.

We saw Peter Dutton do this yet again on Sky News on Tuesday, with a dog-whistle that was more like a fog-horn, claiming refugees would both simultaneously steal people’s jobs, presumably cat-burgling them from under their noses while they sleep whilst also languishing on the dole, costing respectable-tax-payers their hard-earned-money and contributing to the ‘debt-and-deficit-disaster’ in a neat little package tying refugees to all voters anxieties all at once. Both Julie Bishop and Malcolm Turnbull had opportunity to repudiate Dutton’s statement, but both chose not to, and rather smoothed the edges while still maintaining the frame.

It was clear at this point that opinion polls, both published and possibly internal polls, have shown Turnbull the Liberals are in trouble. To hit the refugee-demonization-panic-button so early in the election campaign, it had me wondering how much lower the Liberals could go since there are still many weeks of campaigning left. They had already spent a couple of weeks trying to tie Labor candidates in knots over their inconsistent positions about Labor’s asylum seeker policy, a narrative which possibly was failing to have the desired effect, forcing Dutton to go hard or go home. But has Dutton over-reached and blown the whole strategy, sullying Turnbull’s squeaky-clean-I’m-not-Abbott-in-disguise image in the process?

Yes, I believe he has.

This is where the unlikely hero of the story, Karl Stefanovic, popular host of Channel 9’s Today Show, enters the scene, smashing a hole in the Liberal’s refugee demonization strategy and possibly damaging it beyond repair.

You can watch Karl’s editorial here, where he calls Dutton’s comments ‘un-Australian’ and urges him to apologise. Powerful stuff.

The key to Dutton’s undoing has been the response from various groups, including Labor, the Greens and refugee advocates, as well as influential personalities like Stefanovic, moving the frame from ‘boat people’ to all immigrants.

A poll taken last year by the ANU showed that 9 in 10 voters think immigrants ‘improve Australian society’. The poll also showed evidence that Australians are not so positive about what they often refer to as ‘illegal immigrants’. However, if Dutton’s comments are seen through the prism of all immigration, and not just people arriving by boat, those 9 in 10 voters who favour immigration, many of whom are from migrant families, may start to question whether the Liberal government is trying to demonise all migrants, and therefore will start to feel very uncomfortable with the dog-whistling strategy.

Our leaders should never use hatred and fear to win votes. The only way to stop them doing this is to ensure the dog-whistling strategy doesn’t work. I don’t know how the ever-important marginal seats will respond to the current debate, but I do know that Karl’s landmark speech goes a long way to improving this situation, and is hopefully the start of a positive shift which is both a good thing for political discourse and for cohesion in our community.