Labor framed as the villain again 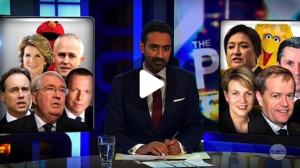 Over the last couple of days, the Twittersphere has been full of congratulations for Waleed Aly’s The Project segment on the Renewable Energy Target (RET). If you haven’t watched it yet, here it is. Apart from the fact that it’s fairly amusing that journalists like Aly get congratulated for talking about the details of a policy, and showing that they actually care about policy outcomes, (because shouldn’t they all be doing this all the time?), the segment was, on the whole a good one. However, and this is a big HOWEVER, it does drive me crazy that once again, Labor is framed as the villain, along with the Abbott government. Because journalists like Aly, like most political journalists, and like pretty much every cycinical-Labor-bashing-I-know-best-and-I-never-give-credit-where-credit-is-due tweep who seem to call themselves lefties, but have learned the art of bashing Labor from the experts like Murdoch and his minions, can’t frame any story that is negative about the Abbott government, without also framing Labor as equally as villainous, equally to blame, and (watch my eyes roll), just as bad as the Liberal government. I don’t have words to explain just how frustrating this vogue way of talking about politics is!

Look at the video again, and notice how it implies that Labor is helping Abbott to kill the RET. You’ll see photos of Bill Shorten pulling a silly face (to show he’s stupid) and the graphics on the video’s backdrop have Liberal AND Labor MPs with characters from Sesame Street, presumably to show that they’re all childish puppets. And all the same. This type of not-so-subtle imagery, and the language around ‘bipartisanship’ is clearly aimed at framing Labor as part of the problem; in this case part of the reason the drawn out RET negotiations are causing a decline in investment and jobs in the renewable energy sector and a bleaker outlook for our future thanks to climate change caused by emissions that could be abated by an increased use of renewable technologies. But hang on Aly. Hang on while you try to bash Labor over this one and have a look at a few things I like to call facts and political reality.

Firstly, the RET, Aly forgot to mention, was a success of the previous Labor government. The way he spoke about the policy, you’d swear it originally appeared out of thin air! The Howard government introduced the policy in 2001, but set the target at a measly 9,500 GWh. It was the Labor government, in 2010, who increased this target to something far more revolutionary – 41,000 GWh – in order to reach the 20% emissions reduction target by 2020. It was this policy, implemented by a Labor government that gave rise to huge investment in the renewable energy sector. This investment was further boosted by Labor’s 10 billion dollar fund that was financed by Labor’s Carbon Price policy (which the Greens were also partly responsible for through Labor’s negotiations to form a minority government). So just to recap, Labor set the responsible target, Labor funded investment through the Carbon Price and Labor got zero credit for any of this from anyone in the media at the time, including the likes of Aly. Just like Labor gets zero credit for any of their progressive policy successes.

All of this background to the RET policy was left out of Aly’s segment. To someone uneducated about the policy, it would appear that naughty, bad, bad Labor was willing to compromise everything the RET has achieved by supporting Abbott’s bid to reduce the RET in a bipartisan show of deceitfulness. To someone who hasn’t been following the story (and if you care so much about climate change to retweet Aly’s video yet haven’t noticed what’s been going on for over a year, I think you need to translate this ‘caring’ into making sure you’re ‘informed’), you would think that Labor is the one putting the renewables industry at risk by helping the Abbott government to dismantle the target, when actually the opposite is the truth. The reason there is a stalemate between Labor and the LNP over this policy is because Labor has recognised that compromise must be made in order to salvage as much of the effectiveness of their RET as they possibly can, but so far Abbott hasn’t compromised enough to get Labor’s support. Labor’s position is that they want the target at, coincidentally, the place they set it in government in 2010 – 41,000 GWh. This is Labor’s ideal. But Labor isn’t in government anymore, and in case everyone hadn’t noticed, it’s fairly difficult to run the country from opposition. And this is the point at which I would ask Aly, because he didn’t mention it, what exactly would he like Labor to do differently? Labor has been fighting the Abbott government policy of reducing the RET to 26,000 GWh. If Labor had given bipartisan support to Abbott’s government, the RET target would be 26,000 GWh, a disaster for the renewables industry and a disaster for the future of Australia’s stable climate.

Where was Aly’s outrage when Abbott announced this 26,000 GWh policy? And where has Aly’s coverage been of Labor’s fight to stop this policy succeeding? Now, after a year of fraught negotiations, Labor has managed, with the help of the renewable energy industry, who they have been working closely with as any responsible opposition should, to pull the Abbott government kicking and screaming up to a place where there might be some compromise to save the policy – at 33,500 GWh. Yet the Abbott government won’t accept this compromise, insisting on 32,000 GWh, which is clearly just a political move to try to maintain some vestige of control over the negotiations and letting investment continue to suffer in the meantime. So again, what would Aly have Labor do in this circumstance? Give in to Abbott and accept the lower target, or keep fighting to bring them up to a target that is lower than Labor would like, but has been deemed acceptable for the time being to the renewable energy sector in order to keep investment flowing. It’s not clear what Aly would prefer Labor did because no one ever has this conversation when they’re busily saying Labor has done everything wrong and Labor is the villain and no one should support Labor and oops…. then we got an Abbott government and wasn’t that a disaster for climate change policy?

Some credit where it’s due Aly and quit the Labor bashing. Your RET segment would have been more informative had you not given in to your usual predilection for painting Labor and LNP as ‘the same and just as bad as each other’. I would better believe you cared about climate change if you didn’t paint Labor and Liberal as sharing similar climate change polcies. No one who really cares could possibly infer this. And your profession would be more valuable to our community if it didn’t imply a vote for Abbott is the same as a vote for a Labor government, which the outcome on climate policy has painfully shown to be a complete and utter lie.