An Open Letter to Peta Credlin 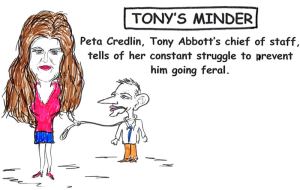 First of all let me say that I’m sorry you’re having such a horrible time at work at the moment. Since it’s clear that you work extremely hard and your job is pretty much your life, I’m sorry that your life is fairly horrible at the moment too. I really am. This solidarity I feel with you, by the way, has nothing to do with the feminist code or standing up for the ladies, because quite frankly I don’t think your current predicament has anything to do with your gender and in writing this letter, I want to make the point that I am writing to a person, not a man or a woman. I am writing to a person who holds a great deal of responsibility, and power, and I don’t think you’re getting a fair hearing and clearly no chance to explain what is really going on in your world. So bear with me for a moment while I try to envisage how things have got to this point, and perhaps you are the only person who can confirm or deny if I’m off the mark.

First of all, it’s clear to anyone with any understanding of who and what Tony Abbott is that you’ve got your work cut out for you keeping this moron in check. I know the Australian media did their best to help you out during your time as Chief of Staff to the Leader of the Opposition, in that you didn’t really have to worry about any real scrutiny of your boss, and therefore were able to keep the puppet on-message by sticking to carefully recited three-word-slogans and never answering any questions at press conferences. There weren’t many times when you agreed for Abbott to go on radio or television to be interviewed by anyone who wasn’t already in your corner, fighting the same fight as you, so I guess this made your life a whole lot easier as there was no challenge to the ideas behind the three-word-slogans, or investigation into a pamphlet that you said was a plan but I’m not sure any of the press even read. Most importantly, no one bothered to check if there was any factual or expert analysis contributing to the formation of your slogans; for example, the journalists didn’t worry about the cost and effectiveness of the Direct Action policy because they just loved your idea of taking Abbott banana stacking, truck-stop chatting, butcher visiting and Alan Jones rally attending to fight against a climate change policy that was working to reduce emissions, and generating revenue for renewable technologies just as Labor planned for it to do. The journalists never asked ‘what budget emergency?’ so you could continue to use this lie to justify ideological slash and burn. So this lack of scrutiny generally, for both Abbott’s character, personality, ideas, competence and honesty and for the few policies you told the electorate about before the election, really made your job a whole lot easier.

I’m wondering if perhaps it was too easy. Do you ever wonder if you were lulled into a false sense of security? You knew your boss was incapable of being a leader. You knew that without you by his side at every waking moment, a disaster would happen. That’s why you’ve had to work so hard. That’s why, according to John Lyons, who did me the favour of confirming everything I already knew about Abbott, you’ve had to resort to interrupting Abbott and even placing your hand over his mouth when he’s about to say something stupid. Again. You’re just doing your job! And that’s why I feel sympathy for you. Maybe when he won the election, you got a bit complacent? Or maybe his incompetence is literally impossible to keep secret forever?

Even with the tight controls you have placed on Abbott since becoming Prime Minister, even with you standing close by his side in every interview, in every public appearance, in any scenario where he has to do anything in his job, a job he is being paid very well to do, you can’t stop the occasional glimpse of the real Abbott being flashed to the country. It must give you nightmares! The knowledge that you can stop Abbott leaking himself to the world. No matter what you do, how hard you work, somehow the real Abbott has been revealed. And as you always knew, Australians don’t like this person at all. And as you always knew, there is no way he would be Prime Minister now if it wasn’t for your careful management of his image; and when I say careful management, what I really mean is trying to turn Abbott into someone who doesn’t exist. Because you know as well as I do that he’s just not cut out for his job. He’s not intelligent enough, he’s not articulate enough, he’s not inspirational, funny, kind, quick-witted, compassionate, approachable, organised, fair, strategically minded or, the most importantly, likable. He’s just not likeable and now that Australia has seen the real Abbott, there’s nothing you can do about it now Peta. Your job is finished because you have failed to hide Abbott. You’re going down with the sinking ship.

Before I sign off, I want you to know that I might respect you, but I certainly don’t like you. I don’t like the job you are doing, but I respect that you’re working hard. I just wish you were working hard for the good of Australia, rather than for the good of rich mates and donors to the Liberal Party, and to bring about the IPA’s vision of Australia, which is quite frankly terrifying. But you’re clearly determined, organised, and capable, and the reason you’re still sitting next to the Prime Minister of Australia, feeding policy ideas into cabinet, pushing your version of the world onto the country’s agenda, and making life very difficult for anyone who falls outside of your privileged bubble is because he needs you. He can’t get rid of you because you’re the only thing between him and humiliating annihilation in his career. So you’ll keep your job, but it’s not going to be easy. Now that the scrutiny has finally, belatedly, arrived, it’s like a tap that has been turned on and is now spewing water like a fire hydrant. You can’t turn this tap off now Peta. Abbott’s own colleagues are leaking to your old media friends, so this is way out of your control now. Abbott is now a known liar, so when he denies the content of the leaks, no one believes him. Does Abbott even have any friends except you anymore? We can all see that your boss, the emperor is not wearing any clothes and no matter how many blue ties you try to cover him up with, we can see his rude bits and quite frankly, the country is disgusted by the sight of him.