An Open Letter to Malcolm Turnbull 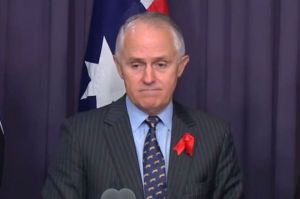 I hate to distract you from the clusterfuck that is your political party at the moment. But I can’t help but notice you’re all very busy doing whatever it is you do during a painfully drawn out Libspill; you know – making phone calls, counting numbers, receiving phone calls, tallying numbers to be counted, and not really concentrating on your jobs that you get paid to do, by us the tax payers. It’s all actually fairly boring apart from being absolutely impossible to look away from. But while you seem to be personally readying yourself for the job you’ve been readying yourself for your entire life, I wanted to just let you know how I feel about your leadership ambitions and the type of Prime Minister you are going to be. I don’t think you’re going to enjoy this.

First I’d like to say that I do appreciate that you’ve previously been very vocal about your support of action to reduce the catastrophic effects of climate change and of course we know you lost the leadership of the Liberal Party previously for your determination to be bi-partisan and to support Rudd’s ETS. You should be applauded for this noble gesture. However, what you will not be applauded for my be, and all Australians who worry about our ever uncertain future in a post-climate-change world, is that you are willing to give up on this determination, this value, this hallmark of your political career, in order to get yourself a new job. It’s one thing to be a spineless, cowardly, lying little worm like Tony Abbott and to stake your political career on denial of climate change and the wrecking of a perfectly good Carbon Price. But honestly, I think your betrayal would be worse Malcolm. Because you have shown that you understand the science, you accept the science, and you’re alarmed about what the science is telling us. Yet for your own political purposes, for your own personal ambitions, for your own sense of individual achievement, glory, power and no doubt pay rise, you are willing to do deals with climate change deniers on the acceptance that you won’t, when in the most powerful job in this warming land, do anything about climate change. And that makes you the lowest of the low. That makes you worse than a denier. That makes you a grub. Please don’t think Australia isn’t going to notice.

Another policy I am similarly concerned about you getting anywhere near in your planned future as PM is the National Broadband Network. We already know that you’ve been beavering away doing your best to destroy this future-proofing world’s- best national infrastructure project for the benefit of your Telstra mates in your job as Minister for Communications. Or is that the Minister for not-as-fast-as-they-should-have-been Communications? You’ve proved over this NBN wrecking that you’re not fit to be in charge of Australia’s future technological innovation, and therefore you’re not fit to be making decisions about Australia’s future, full stop. And no, I’m not going to give you any benefit of the doubt about what motivated you to destroy the NBN and to instead create a joke of a copper fraudband. If you were thinking you might be able to blame Tony Abbott for everything that happened before you took his job, you’ll need to think again. Because if that’s the case and you did just do whatever you were told without protest, without care for the damage you were doing, then you’re even more unqualified to be our Prime Minister.

As a man who knows how to make money, and who lives in Australia’s most expensive suburb in a house that makes the Lodge look like a cottage, you must know that talk is cheap. Yet, despite your popularity due to presumably the leather jacket you wear on Q&A and your some-might-call-charming-but-I-would-call-smarmy demeanour, all I see from you is talk about your values and absolutely no action to back these values up. For instance, have you ever, once, whilst working as a member of the Abbott government, crossed the floor to protest Abbott’s policies? No? Have you spoken out publically about Abbott and Hockey’s outrageously unfair budget and actually fought them to change anything? Or have you just been laying low, like a snake in the grass, waiting for your moment to strike, your moment to take what you believe to have always been yours at the expense of the Australian public who never chose you as their PM?

The fact is that I don’t trust you Malcolm. I don’t trust you as far as I can throw you. You’re a wolf in sheep’s clothing who talks about supporting gay marriage, but given the chance would forget he ever said that and instead campaign to reincarnate Howard’s WorkChoices as soon as I can say ‘free-marketer’ or ‘neoliberal stooge’. You want what’s best for your rich mates. Though you might make this look a bit prettier than Abbott, we have learnt throughout this painful period of Abbott’s prime ministership that the most important thing is not how something looks, but how they behave. What policies they try to push through. You would deregulate universities, you would slash and burn to create a small ineffectual government, you would destroy Medicare, you would cut education funding, you would fight on behalf of miners as they deny Australians their fair share, you would get rid of penalty rates, you would decrease the minimum wage, you would deny rights to asylum seekers, you would destroy the NBN and you would deny Australia a climate change policy. How do I know you would do all these things? Because you’ve been doing it as a member of Abbott’s government and there is absolutely no reason on earth why someone like you, who shares Abbott’s values, would do anything differently. A turd with a cat-like grin polished across it is still a turd.