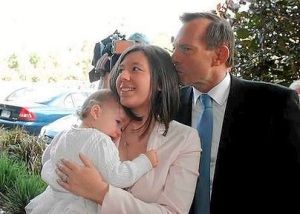 As we await the release of tomorrow’s Federal Budget, it would appear in Abbott-land, not all promises are born equal. The promise to return the budget to surplus is clearly far more important to Abbott than promises not to cut welfare, health and education funding. Another priority promise appears to be the promise to ‘stop. the. boats’, which Abbott uses as an excuse to override any semblance of decency and humanity in the way that our country treats the most desperate members of our community. But my question is, how much do Abbott voters value these promises to return the budget to surplus and to stop the boats? Do they value them as much as Abbott clearly does? Or are the people who supported Abbott in 2013 starting to ask a question that should keep Abbott and his team awake at night – are the end goals of a surplus and the end of the flow of boats really worth all this cost?

Like the ideological zealot that he is, Abbott is quite clearly more than happy to swing his wrecking ball at anything that even remotely resembles Labor Party policy, and will continue to do this for the term of his government because he can. This is an important point. Abbott is not cutting and burning spending because he really wants to keep his promise to return the budget to surplus. Because clearly there was no ‘budget emergency’, and clearly deep cuts to an economy that is already nervously coming out of the global financial crisis is a hugely detrimental strategy. These cuts have nothing to do with Abbott keeping a promise, because apart from anything else, Abbott has proven time and time again that he doesn’t give a crap about keeping promises. Abbott wants a small government, not because it is good for the economy, not because it is good for the community, and not because it is the responsible adult thing to do. He wants small government because it suits his free-marketeer ideology.

I’m guessing the vast majority of Abbott voters don’t understand what ideology even means, let alone how an ideology such as Abbott’s guides every decision the man makes. However, I’m wondering, while Abbott bandies around his ‘surplus at all costs’ justification for his broken promises and his wide ranging and anti-community, anti-poor-people, pro-wealth-inequality policies, if people who voted for him are a little peeved that he’s doing all this for them. Because I don’t think when they voted for Abbott, and they heard him say he’d deliver a surplus, they were really giving him permission to do everything he is doing now. Did Abbott voters know that the surplus promise came with a list of asterisks that completely undermine the social contract between government and voters? Did they know they’d be paying for GP visits? Did they understand that once the mining tax was gone, they would have to pay for the loss in revenue themselves somehow? Are they happy about paying more for petrol, after Abbott told them it was OK to protest against the Carbon Price? Are they starting to wonder who this lunatic is who they have put in charge? Are they starting to realise that their support for Abbott is being used to justify him doing terrible, horrible, cruel, ideologically-driven, fiscally irresponsible things to the country which is going to detrimentally influence their own lives, and the lives of all their family and friends? Are they feeling used? I think they might be.

Clearly most Abbott voters don’t give much thought to the lives of asylum seekers and the reasons why people put their families on boats. Nor do they care what happens to these people if they don’t get on a boat. But I wonder if the ‘stop the boats’ slogan that sounded so promising to these people during the election campaign, is now making them feel a bit nervous. Did voters understand when they gave Abbott their vote that he would be using it to destroy Australia’s relationship with Indonesia? Are they starting to understand that there was never a simple way to deal with asylum seekers arriving in Australia by boat and anyone who said there was, was lying? And even if they don’t care about asylum seekers, what do they think about asylum seekers being murdered inside an Australian detention centre? Are they proud to know that they had a part to play in the violence at Manus Island? Do they cringe even just a little bit at the thought that they gave Scott Morrison control of this situation, and he’s clearly not fit to be in charge of people’s lives?

I very much doubt any Abbott voter would ever admit to a feeling of unease about the surplus situation, or what is happening to asylum seekers, but Abbott needs to understand that even if these voters can’t bring themselves to form the words, or even the thought that they might have done the wrong thing by voting Liberal or National, it will influence their behaviour in the future. Judging by the latest polls voters may be learning not to make the same mistake twice.