Penalty rates at my local pub 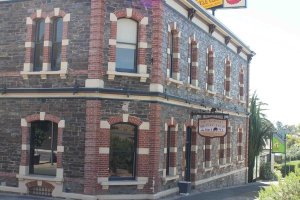 It’s all so very predictable. In his usual sloppy and insipid way, Tony Abbott is trying to bring on an industrial relations war with unions by blaming SPC Ardmona’s request for government assistance on over-generous wage and employee entitlements in the company’s Shepparton factory. Even when SPC Ardmona corrected the record by releasing their workers’ enterprise agreement, and even when local member and self-appointed SPC guardian, Liberal MP Sharman Stone called Abbott out for lying about the issue, Abbott still trudges forward seemingly unwounded. On behalf of his mates at the top end of town, Abbott is working towards their end goal, where business owners can treat their workers however they want, and can pay them however little they want. It’s all the workers’ fault if they complain, because apparently they should feel gratitude for having a job at all. And this despite that fact that that workers’ share of national income has been falling since 2000.

Despite the growth in their share of the national income, business owners and shareholders still want more. Always more. One way to get this is to reduce wages by any means possible. This is why business owners obviously want one objective of any wage negotiation between unions and business to be the removal of penalty rates for working unsociable hours. As chief friend of business and foe of workers, Tony Abbott has embraced this mission; his government has asked for a major review of workplace awards to assess whether minimum terms and conditions, including penalty rates, are still relevant.

I’ve recently come across a local example where a business owner’s displeasure at having to pay penalty rates generated bad publicity at what happens to be my local pub – the Bombay Bicycle Club. I’ve spent quite a bit of time there at a mid-week pub quiz or for a weekend beer and curry. Recently, the pub has undergone a major renovation, with the addition of a large car park and upgrades to the drive-through bottle shop, main bar and restaurant area, a new beer garden complete with fake palm trees, and a meticulous refresh of the incredibly flamboyant British Raj Indian theme. I don’t know how much the building works and interior decorating must have cost, but suffice to say they would have spent more money in the female bathrooms than I am currently spending renovating my whole house.

This article on news.com tells how the pub owner erected an expensive mounted wooden menu in the public bar. This showed how much the meals would cost if he multiplied them by the 2.75 award rate of loading his staff receive for working on a Sunday. It doesn’t take an economist to work out the flaw in this argument, because of course labour costs are just one of many cost inputs that make up the supply of a pub meal. After a backlash on social media, the sign was taken down. The owner was quoted as saying:

“Again, WOW. The sign has been removed. Have read all your comments. I will keep my opinions to myself in the future.”

Apparently the business owner was surprised that his clientele weren’t impressed with his attitude. It’s not clear how his staff, the ones earning penalty rates for working on a Sunday, felt about having to work on what used to be a day of rest, under a sign saying they weren’t worth the extra cost.

However, there is another sign that still hangs in the pub which didn’t make it into the media reports. As a further example of the attitude of the owner of the Bombay Bicycle Club, the clientele are thanked on their way out of the pub with this enormous mounted and framed sign:

Take a moment to read all the things this owner resents having to pay. He’s got all the taxes he can think of up there (even the ones he’s not directly paying, like the Carbon Tax (sic)). He’s also got what would appear to me to be business expenses of his own choosing, including interest on an overdraft and website expenses.

But there’s something missing from the sign. There’s one major thing that the clientele of his business are paying for, which the owner has conveniently neglected to include in the list. No, I’m not talking about the cost to our community of the pokie machine addicts who no doubt helped fund the exorbitant renovations (the pokie lounge is open from 9:00am until midnight from Sunday to Wednesday and from 9:00am until 3:00am from Thursday to Saturday). I’m talking about the profit. The profit the owner of the Bombay Bicycle Club pockets at the end of a long day’s work by his staff who make a tiny fraction of what he does. Of course I’m not saying that the owner doesn’t deserve this profit. It is his business and he has taken the entrepreneurial job-creating risk of developing it. But what gap between the workers’ wage and the owner’s profit is our community comfortable with? Isn’t this the question at the heart of any negotiation between labour and capital?

I wonder if it’s ever occurred to the owner of the Bombay Bicycle Club that most of his clientele are workers.

When I spoke to one of the staff at this pub, they said the owner treats them well and it’s a good place to work. This is good to hear, and somewhat surprising considering the attitude displayed on the board. However, what’s most important about this example is that the business owner is making it very clear that without an award that legally entitles his workers to a minimum wage, including penalty rates for working outside of normal hours, his workers wouldn’t be receiving their current level of compensation for the work they do. These workers would have no hope of negotiating individual pay deals with this boss without the help of their union of workers.

What would happen to these workers if Tony Abbott gets his way and smashes collective bargaining? What happens if minimum pay rates are put at risk? Some bosses who value the contribution to their business that each of their workers make would still pay their staff fairly. But I expect many others, like the owner of the Bombay Bicycle Club, wouldn’t. I expect that those who resent having to pay their staff to work abnormal hours are very likely to resent paying them at all.