Aren’t we better than this? 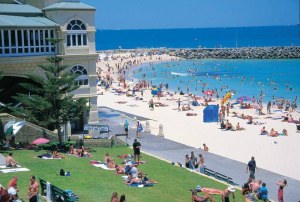 If Australia can’t champion progressive reforms that make our country a better place for everyone, not just a few rich people, who can? If we can’t grow a collective will to restore dignity to the impoverished, to welcome desperate families from war torn countries or places of depraved persecution, to have an economy that provides stable jobs, and not just profit, what country in the world can possibly expect to beat us to it?

Australia Day is a good day to reflect on the privilege of being Australian. I’m not saying this is the best country in the world. It’s the only country I’ve ever lived in, so I’m not one to judge. But I can judge my own life experiences and say that I am incredibly lucky to be Australian. We are a rich country, we have (in the most part) a very pleasant climate, our cities are not overcrowded, we have a stable economy which has been growing for over 20 years, we are mostly employed, and mostly living relatively comfortable lives. Yes, there are many Australians struggling to make ends meet, but we also have a social welfare system which is designed to look after those in the community who can’t look after themselves. This social welfare system is by no means perfect, but at least we have one. That puts us way in front of many other countries in the world.

Yet, with all this luck, if the election of Tony Abbott is anything to go by, Australians are not just ungrateful for our luck, we’re petty, mean and completely and utterly selfish. Abbott played to this side of our national character, targeting our lowest common denominator to whip up fear about what can only be described as #FirstWorldProblems.

Stop.the.boats. Why? Because a very small number of refugees, who have nowhere to else to go, are looking for a safe haven, and happen to choose Australia as that safe haven. We’re not talking tens of thousands of people. We’re talking about tens of people at a time, several thousand across an entire year. A completely manageable number, a miniscule percentage of our rich population, and an amount which has no impact on the residents of Australia. None. Yet in a recent poll, 60% of lucky Australians wanted the Abbott government to treat asylum seekers more harshly. Perhaps we should stop referring to Australia as the lucky country, and instead refer to ourselves as the cruel and sadistic country.

Axe.the.tax. Why? Because Australians are gullible enough to believe big polluters who say they are fighting against the Carbon Price for the good of the community, when really it’s for the good of big business profits. Because Australians believed Tony Abbott when he said climate change was crap. Because Alan Jones is apparently a credible expert on climate science. And the big one – because an increase in our electricity bill, however small this amount was when compared to the cost of our lifestyles, was just too much to ask, regardless of the compensation the government gave us to soften the very small blow. Perhaps we should stop referring to Australia as the lucky country, and instead refer to ourselves as the selfish and greedy country.

Open.for.business. Why? Because Abbott promises to get rid of that horrible nasty red tape and green tape that was only put there in the first place, apparently, to annoy capitalists. Except it wasn’t. Except every single regulation ever produced was designed for the betterment of our community, to protect us from the greed of big business. Environmental protections ensure that profitable activities don’t destroy our environment. Red tape like occupational health and safety laws are designed to increase the likelihood that Australians don’t die at work. Red tape like minimum wages, like the 8 hour work day, like paid maternity leave, like sick leave, like holiday pay, are the only thing that ensures business owners can’t treat workers like slaves. Or would you prefer to remove all this regulation, and let companies like McDonalds pay their staff $7.25 an hour for a 36 hour work week? That’s $261 before tax. But rather than see ‘regulation’ as the necessary protections for workers to stop business owners from taking advantage of them, Australians are happy to vote for someone who vows to repeal as much regulation as he possibly can (in fact 1,000 pieces in one day). Note that Abbott is consulting business to decide which laws will be scrapped. Business. Not workers. Perhaps we should stop referring to Australia as the lucky country, and instead refer to ourselves as the determined to make the rich richer at the expense of the workers country.

My question to Australians on Australia Day is this: aren’t we better than this? Or when we elected Tony Abbott as Prime Minister, were we determined to prove that we’re not better than this? We are rich, we are comfortable and very few of us have anything but lifestyle problems to worry about. Yet, all it takes for us to elect a wrecking-ball Prime Minister, is for him to appeal to our pettiest, greediest, meanest selves. As I reflect on my love of Australia on Australia Day, I wonder whether political leaders on the left are thinking about how they can bring out the best in Australians, rather than the worst at the next election. I’m hoping they can come up with a way of convincing us to be better Australians, because I really want to believe that we are better than this.