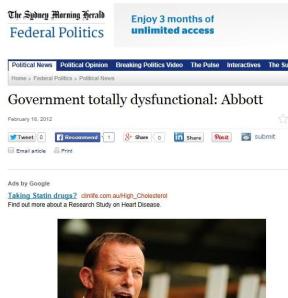 It’s hard to find a single political journalist in Australia who doesn’t trot out the same tired old line they’ve been using for three years to describe the Labor government, and now the former Labor government. Dysfunctional. The narrative between 2010 and September 2013 went something like this: The Gillard/Rudd government is dysfunctional so they must be voted out. And since the election, the line is: The Gillard/Rudd government was dysfunctional so they were voted out. But hang on a minute folks. Let’s scrutinise this narrative for just a moment. First by looking at this favourite word. Dysfunctional.

There are a couple of definitions of dysfunction that are relevant in this context. The first is the meaning no doubt justified by the journalists as true by evidence of the backgrounding by members of the Labor Party against Gillard and sometimes Rudd.

Dysfunction: characterized by a breakdown of normal or beneficial relationships between members of the group.

It would be entirely naïve of me to argue that Gillard and Rudd’s relationship was anything but dysfunctional, and damaging to the government’s reputation. However, when you look at a second definition for dysfunction, the journalists’ entire narrative falls apart through lack of facts and entirely contradictory evidence.

The Gillard government, even whilst being white-anted by Rudd, even with its ability to govern precariously balanced on the knife-edge of minority government, even with the Abbott Opposition doing its best to push them off the knife-edge, and even with the media running with Peta Credlin’s ‘Labor bad bad bad, chaos, chaos, disunity, dysfunction’ circus, was anything but dysfunctional. If you don’t believe me, how do you explain all the fantastic progressive policies that the Abbott government is now busy undoing? The National Broadband Network. The proper one. Education reforms. Paid Parental Leave. The National Disability Insurance Scheme. The Mining Tax. The Carbon Price. Environmental reforms. I could go on and on. All in all Gillard’s government successfully passed over 300 pieces of legislation whilst in government, without Abbott’s Opposition blocking any of them. This record made Gillard’s government, as outlined in this analysis by the Guardian’s Nick Evershed, the most productive in Australia’s history. This is fact. A fact that the political journalists in this country continue to conveniently ignore, whilst also implicitly defending their ineptitude in reporting this success while it was happening. Hang on, no, not ineptitude. I’ve got a better word. Dysfunction.

The mainstream media in Australia was so obsessed with the Rudd and Gillard relationship, and still are, that they are completely dysfunctional in doing their jobs – reporting on what is actually happening. And now that their dysfunction has supported the Abbott government, ironically the most dysfunctional government Australia has ever seen, in winning power, they’re keeping up their pretence that the Gillard/Rudd governments were dysfunctional to explain how this mess came about. But I’m not buying it. Because it’s crap. The ‘dysfunction’ narrative is crap, and doesn’t stand up to any scrutiny, let alone the scrutiny of hindsight.

On the subject of hindsight, it is very interesting and telling to compare the media’s portrayal of the Gillard/Rudd government, with governments from the past. I was a child and a teenager through the Hawke and Keating years. I remember thinking that all Prime Ministers were amazing, inspirational, intelligent and working in the best interest of Australians, until I grew up and understood politics properly, during the Howard years. But after watching the Keating interviews on the ABC recently, I realised that the sometimes very bitter division between Hawke and Keating over who was best fit to be leader, was not completely dissimilar to the ‘leadership tensions’ reported for the last three years between Gillard and Rudd. Throughout the Hawke and Keating years, there was absolutely no doubt that Australia was going through the most profound economic reforms the country had seen in years. People have a lot to say about the Hawke and Keating years, but dysfunction is never one of the words they use. No doubt some journalists will, like a broken record, blame the pressures of the 24 hour news cycle on this inconsistency, but I’m not buying this either. Because it’s crap. And I’m correcting the record.