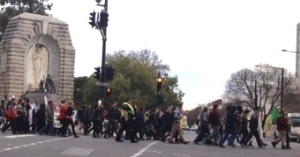 How easy my life would be if I were a Greens supporter. I’m not saying this in a sarcastic way. I’m deadly honest. Life would  be so much easier if I just gave up on Labor and  became a Green instead.

Think of all the challenging conversations I could avoid if I chose not to debate a topic, and instead just stuck with the same argument, the same opinion, no matter how situations changed around me. Imagine if I no longer had to worry about pesky policy challenges like how on earth revenue could be found to fund my ideas. Or if my answer to everything was ‘more tax’ regardless of how the electorate and the business community would respond?

As someone in my early 30’s on the left of the political spectrum, I would no doubt be far more hipster and fashionable if I did hold up a green triangle whenever politics was mentioned. I could get up on my high horse and never get down. I could demand one outcome and refuse to consider all others. I could cry when I wanted to show how much I care, and the argument would be over and I would feel I had won. I could accuse everyone else of being heartless. Of being evil. Of being a sell-out to political reality. I could be a sell out to political reality. Even better, I could become a professional complainer and even take a little bit of anticipated joy out of the prospect of an Abbott government, because it would give me more reason to complain, more reason to stamp my feet, more reason to take to the streets in protest. Protests are fun! And when people asked me what the Greens policies were, I could send them to a web address where dollars and cents aren’t mentioned, like a wish list for Santa, and then I could expertly draw the subject back the asylum seekers, gay marriage and the environment whenever I felt the conversation was moving elsewhere.

When the nasty bad bad man Kevin Rudd dared to suggest an alternative to an asylum seeker policy which has seen over 1,000 people drown at sea, I could refuse to acknowledge anyone has drowned. I could argue that we should encourage anyone who has enough money to pay for a seat on an old leaky boat to make the treacherous journey to Australia if that’s what they want, and damn the people who don’t have a cent to even think about making this decision. I could say any policy which wavers even fractionally from my ideal situation –  where there is no limit to the number of asylum seekers either drowning or being resettled in Australia – is evil and unconscionable. And when people try to talk about these other policy suggestions, and the outcomes of these policies, and even mention the word drowning, I could get angry, confrontational and upset, then go on a protest march to make myself feel morally superior. When Tony Abbott suggests an unworkable policy that is far worse than that suggested by Labor, I could whine even louder that this is a race to the bottom, but refrain completely from actually talking about the problem, and practical solutions to fix it. And I could commit to my plan to attack Labor as the worst of the worst, while ignoring the alternative problem of an Abbott led government and what this outcome would do to the country in many policy areas, not just my favourite one.

If I didn’t get the climate emissions reduction policy I wanted, I could completely withdraw from the debate and sit on my hands while someone else fought it out on by behalf. And if I did manage to get my policy onto the government’s agenda, I wouldn’t dare stand next to the Labor party and help them to sell it to the electorate. No, that sort of ugly political contest would be way below me if I were a Green.

Of course, in this easy world where I’m a Green, I wouldn’t care about industrial relations. I would pretend not to notice that an Abbott government, given the chance, would completely destroy unions and the workers rights they fight for. As a Green, I could remove myself from the messiness of having to fight for nation building reform, like the NBN, Paid Maternity Leave, the National Disability Insurance Scheme and the National Plan for School Improvement. Of course I’d privately relish the outcomes of these policies, if they were successfully implemented, but I would never get my hands dirty actually supporting the Labor party to pass these reforms. And I’d avoid sounding like a hack by actually praising the Labor party for transforming their ideas into reality.  That would take far too much of my time and effort away from talking about the environment, gay marriage and asylum seekers.

No, if I were a Green, I could have it all. I could argue for every ideal I wanted without ever having to actually fight for anything to be done. I could hold my nose and vote for Labor and say I preferenced them second to last and oh how high and mighty that would make me feel. Or I could do a donkey vote and laugh and laugh about it with my friends, while we toast democracy and the amazing opportunity it gives us. I could keep my idealism in tact, without actually having to reason with a voter who disagrees with me to sell a policy. I could be the world’s most annoying back-seat-driver when it came to the Labor party – telling them how to run government when I’d had no experience doing such a thing. I could be pure. I could pretend factionalism didn’t exist in the Greens, and that their grubby purpose isn’t in fact to replace the Labor Party as the left-wing alternative. I could opt-out of any debate I didn’t want to have. I could take no pleasure and no pain from what happens to the government that I will never belong to. I could be an activist instead of a political realist. I could chain my identity to the brand of a party that never has to make a tough decision. I could be above it all.

But of course, if I took the easy path, what on earth would I achieve? I might be young but I’ve learnt enough to know that nothing worthwhile was ever easy. Hence why I’ll stick with Labor.