A Wicked Problem. A Wicked Solution? 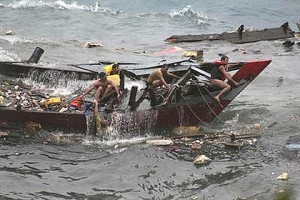 When Kevin Rudd announced Labor’s new asylum seeker policy yesterday, my knee-jerk reaction was to be very concerned. Kevin Rudd and his Labor colleagues obviously desperately want to win the election, as I hope they do. But the last thing I want to see is Rudd winning by adopting Abbott’s right wing policies– that’s not the Labor Party way. And besides, what’s the point of campaigning against Abbott for the last three years, only to eventually give in and say ‘if you can’t beat them, you may as well become them’? However, knee-jerk reactions aside, after having some more time to think about this situation, I must admit I’m really not sure what to think. But what I would like is to at least be given the opportunity to discuss and debate policy changes, before having them written off by every left-winger I know, before joining protests and before wasting my vote by not voting for anyone.

When I first heard mention on Twitter that Rudd was going to get rid of the Carbon Price, I panicked. But then after realising he wasn’t actually emulating Abbott, and rather moving to an ETS a year sooner than we would have anyway, I understood it was actually a smart move. Taking ‘Axe the Tax’ away from Abbott has left him impotent. It has erased his one-dimensional stunt and smear campaign, and forced the media to take a least a cursory interest in his Direct Action alternative. This has to be a good thing. In an ideal world, the Carbon Price would have been accepted by the entire community as a cost we had to bear and polluters wouldn’t have pooled their resources to smash the Labor Party for bringing in this policy. However, we don’t live in an ideal world, far from it. And if the electorate is threatening to vote Labor out for introducing the Carbon Price, and all it takes to stop this happening is to change it to an ETS a year earlier than originally planned, isn’t this outcome better than handing power to Abbott and his wasteful, ineffective joke of a Direct Action policy? Might the ETS not even work better to reduce emissions? Pragmatism, I think it’s called. There’s no point being holier-than-thou in opposition when you can have the less-than-perfect, but better than the alternative, policy in government.

Bearing in mind that the whole idea of Kevin Rudd as Prime Minister has been a little difficult for me to stomach over the last few weeks, I am now looking at his asylum seeker policy change and wondering if he’s done something evil and unacceptable, or if he’s again being pragmatic in the very less than ideal world of an electorate who hate ‘boat people’. When you’ve got every news outlet in the country, including the ABC, reporting every single asylum seeker boat arrival like it’s an invasion by an alien species, it’s no wonder there are large portions of the Australian public who feel justified in their bigoted hatred of people arriving by boat. But the really difficult problem, which many seem desperate not to discuss, is that the political reality of the situation is thus: if the majority of the electorate is going to vote for the leader who promises to ‘stop the boats’, Abbott is going to win the election by promising to ‘stop the boats’. And however vile, illogical and racist this sentiment is, I haven’t seen anyone, Labor and Greens included, make any headway whatsoever in changing this attitude in the Australian community. Yes, we should be talking about these people’s individual stories and their terror and desperation in their decision to get on a boat. But while we fail to hear these stories, and while the electorate refuses to budge on this issue, the Labor party is left with a wicked problem. Pander to the voters by promising to also ‘stop the boats’. Or lose the election by leaving the policy as is. And let Abbott ‘stop the boats’ by turning them around, which everyone with any expertise knows is not a viable alternative and will not solve anything. Also, good luck getting Abbott to increase the intake of refugees. He’d slash it given the chance. No doubt even suggesting that Labor should ‘pander’ to the electorate is enough for me to lose very Greens Twitter follower I have, but I’m not apologising for supporting anything that keeps Abbott out of power.

So back to Labor’s asylum seeker PNG policy. Again, I haven’t totally decided how I feel about it, and I am not ready to jump to campaign against it, or to support it in full. But I do know that this is one policy area where many people seem to want it both ways. For instance, when the media reports the devastating news that asylum seekers have drowned on their journey to Australia, the government is blamed for these deaths. Because they didn’t ‘stop the boats’. But then when the government attempts to find a way to convince asylum seekers to stay where they are, to wait for resettlement, to not get on a boat, the very same people who are complaining about the dangers of coming by boat, are complaining about the policy alternative being cruel and inhumane. Let’s get something straight. Kevin Rudd can’t stop people who come by boat from drowning. If people choose to come by boat, a certain percentage of them will drown. This is tragic and unfair. But it is fact. This is why I am not afraid to say that I support stopping the boats. I don’t want to stop asylum seekers. I just want them not to get on a boat. In fact, if Rudd’s policy of sending asylum seekers to PNG does stop people coming to Australia by boat, won’t this policy also stop drownings?

And how about the people who have been stuck in Indonesian refugee camps indefinitely because they can’t afford to pay a people smuggler to bring them to Australia? Aren’t these people disadvantaged by their extreme poverty? If Australia agrees to provide a certain number of Humanitarian Visas each year, and the quota is filled by those asylum seekers who have survived the boat trip to Australia, what happens to the people who can’t afford to come by boat? I don’t think we talk about these forgotten people enough.

One part of Rudd’s PNG policy announcement which seems to have flown under the radar, in preference for outrage and condemnation from some politicians, their supporters and those speaking on their behalf in the media, is the promise to “consider progressively increasing our humanitarian intake towards 27,000 as recommended by the Houston panel.” I congratulate Rudd on this, and I hope that it is not just considered, but also implemented. As I said, I fully support Australia accepting more refugees. Full stop.

I guess where I’m feeling most confused is trying to reconcile my feelings about the policy, with the underlying dread that Rudd is just doing this to win votes. But then, isn’t beating Abbott, and stopping him turning back boats, a justifiable motive for doing whatever it takes to win the election? And is the PNG solution really as evil as many people are making out? I haven’t decided, but I appreciate the opportunity to think aloud, to analyse the situation before a knee-jerk reaction becomes my opinion. This is quite a foreign feeling for someone as opinionated as I am, but I’m learning to live with it.