An Open Letter to the Mainstream Media 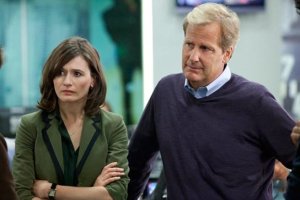 I know we haven’t exactly got along in the past, but I’m just writing to let you know the status of our relationship is now in an emergency zone. I’m no longer just pissed off. I’ve reached the point of contempt. It’s not like I didn’t already know you were a broken-record narrative, full of bias, inaccuracy and completely anti-balance, but now I have a fictional model of just how good you could be if you gave a shit. And this just makes the reality of your inadequacy even more obvious. Yes, I’m watching Aaron Sorkin’s Newsroom and it’s completely depressing.

Since you probably haven’t watched Newsroom, and if you have you’re no doubt laughing it off just like your biggest defender, @sclark_melbs, calling it ‘fictional’ and ‘drama’, I thought it might be timely to let you know you could really learn something from this television series. And yes, you can learn something from fictional stories – they are just words formed into ideas which, after all, is your stock-in-trade.

In Episode 2 of Season 1, the fabulous Executive Producer of News Night, MacKenzie McHale, informs her staff of the standards they will be working to in her newsroom. These four beautiful rules are so simple, yet so ignored by your journalists day in day out:

Do you ever think that maybe if you showed this sort of integrity in the news reporting process, you might actually do some good in our society? I realise this isn’t your ultimate goal, and not the reason you go to work every day, but wouldn’t it feel nice inside to actually know you were contributing to society rather than ripping it up and stamping on it? Standards of decency. Do you even have such a thing?

Let’s look at these rules in regards to your favourite topic of political reportage – Kevin Rudd and his shambolic quest to undermine the Prime Minister. Apparently this story trumps news of policy success, and pretty much anything the Labor Party wants to say on any topic which isn’t related to bringing Gillard down. And I can’t for the life of me work out why? Unless of course you are just hacks. I’m looking at all of you – from Murdoch’s unprofitable rabble, all the way to, upsettingly, the Guardian, which we all hoped was going to be above this bullshit Groundhog Day leadership tension story. But alas, the Guardian is not. And neither is the ABC, so the commercial interest excuse fails here. I would welcome a journalist explaining to us how Kevin’s white-anting antics are important information to the electorate. Do we need these stories to make up our minds in the voting booth? I’d say emphatically, no, it’s just Labor bashing.  Based on the historical context, we already know Kevin doesn’t have the numbers after one challenge, and one aborted challenge. Based on these simple facts, which you are all very aware of, is there any relevance in the news that Kevin is still upset that he’s not PM anymore? My cat doesn’t have the numbers to challenge the Prime Minister, but if I started a rumor that she wanted to, would you run with that too? How about more historical context? Like the fact that Kevin was shit at being Prime Minister and was replaced by an extremely competent Deputy Prime Minister who has had ten times the policy wins Kevin had? This just doesn’t ever get a mention. How is this not relevant to your bullshit stories that weren’t relevant in the first place?

How about we look at all the times you break standards 2 and 4. When you quote ‘the Opposition says’ without actually giving any thought to the accuracy of what the Opposition says. I heard a cracker tonight on South Australia’s ABC news. Some of the relevant facts were, thankfully, included; South Australia’s Premier Jay Weatherill had confirmed his state’s support for the Gonski education funding deal. I’ll note here that when the ACT signed up, you made the story about a sandwich. Seriously, you did. But credit where it’s due, you reported Gillard’s success in reaching agreement with South Australia. And then you ruined it by adding that the leader of the South Australian Liberal Opposition had criticized the deal, saying it was not delivering an education funding boost to South Australian schools, but rather a funding cut. So here I ask, did anyone check if the Liberal Opposition Leader was correct in this statement? Because I actually think he was unashamedly incorrect- the whole point of the Gonski deal is that every school will be better off. But just the fact of reporting this inaccurate statement makes the electorate think it is true. When you do this, you’re not informing the public; at best you’re confusing them, at worst you’re lying to them. Does it really take very long to verify the facts of someone’s statement before quoting it on air? Is the overused knee-jerk technique of adding ‘the Opposition says’ to every news bulletin really the best form of the argument? How about getting an expert in to speak about education funding if the Opposition don’t have anything relevant or truthful to add (in other words – if they don’t actually have an argument)? And are there really two sides to every story? I would say if the Opposition are just making shit up, they have no right to be included in the report. And if your journalists can’t verify the veracity of the Opposition’s statements before you quote them, why the fuck are you putting them in your news story? This is not balance. This is lazy. Do you ever think that if you did hold politicians to a very basic, base-line standard of only reporting their slogans and sound-bites when they are factual, you might actually improve the quality of political discourse in this country? Never considered it? Didn’t think so.

It’s when you don’t bother to find out who else was at Brough’s dinner. It’s when you take the word of the restaurant owner over the chef’s evidence and you decide not to investigate the truth. It’s when you don’t ask why Brough apologised long before the restaurant owner said the menu was never printed. It’s when someone is lying and you don’t care. It’s when you stalk Craig Thomson and ignore James Ashby. It’s when you beat up stories about Gillard’s ex boyfriend 20 years ago, but make nothing of Abbott’s current slush-fund court case. It’s when you report everything from the worn out, inaccurate narrative of Labor ‘chaos’ and ‘failure’ and you actively support Abbott’s teflon-un-scrutinised stunt show, that we know you are campaigners, not journalists. It’s when you forget that it’s your job to find things out and to tell us the facts, that we remember we can’t trust you. And if we can’t trust you, why should we bother with your words? It all comes down to integrity and respect for the audience. Of which I would question if you have any. Ever noticed how the only people defending you on social media are your own members? Why is that? How can all of us be so outraged by you on a daily basis yet you still ignore the criticism? Time and time again we see you saying you’re getting disapproval from supporters on both sides of politics so you must be doing the right thing. This is bullshit. You’re getting criticism from everyone because you are doing a terrible job of reporting the news. This is why watching Newsroom is so sad. I’m watching a hypothetical scenario of how things could, in a decent world, work. But you, the mainstream media in Australia, do not belong to this world. So this world remains an unattainable fantasy.