An Open Letter to Julia Gillard and Kevin Rudd 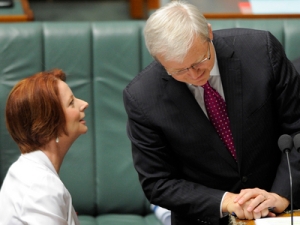 Sorry to address you both informally by your first names, but I’m assuming I’d start off on the wrong foot if I wrote this letter to the Prime Minister and Kevin. And the relationship between you is what I’m writing about. It’s time to get over the sensitivities and to unite for a good cause. Julia and Kevin, I’m calling on you to build a bridge and get over it.

So let’s recap how we got to this awkward place. Kevin, I want you to know that I used to be one of your biggest fans. I wore the Kevin07 T-Shirt proudly as you defeated John Howard in the 2007 election. Yes, it was a brilliant win and a time of great anticipation and optimism. I’ve always thought your policy ideas were fantastic, and you do seem to be a smart and personable man. Being the Prime Minister of Australia, especially throughout 2007 – 2010, was not an easy job. You worked your guts out. Your response to the GFC was top notch. You never got enough credit for that. Your ETS policy and Mining Tax policy were also fantastic ideas. I’m sure, you, like I, will always wonder what might have been if the Greens hadn’t looked a gift horse in the mouth and rejected the ETS policy. I’m sure your mate Malcolm Turnbull wonders the same thing. But it wasn’t just your failures to pass policy that were the problem. It was also you Kevin. Your leadership style left a lot to be desired. You see Kevin, being a leader isn’t just about proposing things and taking the praise. Being a leader is about working with other people to get things done. And that’s where you fell down. Your team didn’t support you anymore because you were a crap boss. And you can’t run the country if you’re a crap boss. It broke our hearts to see you cry when you were forced to step down from the leadership of the Labor Party. And it’s not surprising you were so upset. No one likes being fired. But your behavior since then has also left a lot to be desired. Particularly your behavior towards Julia, who, it would seem, you are blaming for your downfall. Is that really fair Kevin? Is it Julia’s fault you lost the support of your team? I don’t think so.

But maybe you should look on the bright side. You should feel pleased that your horrible experience of losing the support of your party has now paved the way for other people to go through a similarly awful experience, without the subsequent abuse and ridicule that was reserved for you and Julia, the Labor Party and anyone who supports the Labor Party. You see, you’re a trailblazer now Kevin. You’ve made the leadership spills experienced by Ted Baillieu and Terry Mills into regular run-of-the-mill, not even front-page-worthy news. I know it’s taken the mainstream media a long time to get used to the idea that a party decides who their leader is, and some of them are still obsessing about you and Julia a bit too much (don’t worry, I’ve written to Michelle Grattan about that), but I don’t think you’re helping this situation Kevin. I don’t think your supporters are either. The mainstream media will keep reporting ‘Labor leadership tensions’ while there is even a tiny whiff of this in the air, however insignificant, because this suits their narrative of Labor ‘chaos’ and ‘desperation’. The only way to wipe this narrative out is to kill their story. If they can’t write about Labor leadership tensions, there is a minuscule chance that they might find some space in their tiny minds to scrutinise Abbott. And even if this is far too optimistic an idea, maybe they’ll look at Labor government policy instead of just crucifying personalities. Isn’t this at least worth a try?

The thing is, Kevin, I know deep down you want to do what’s best for Australia. I know you have a very keen interest in promoting progressive reform, and that this interest is far more important than your hurt ego. In your heart of hearts, you know in order to do what’s best for a progressive Australia you need unequivocally to support the Labor Party at the upcoming Federal Election. You must promise to stop leaking, and tell your supporters in the Labor caucus to follow your example. You have to understand Kevin, the only way you are going to positively influence the country’s future is by sucking up your disappointment about not being Prime Minister anymore, and supporting Julia in her campaign to beat Tony Abbott.

Julia, it’s not just Kevin who needs to suck it up. I can see you’ve been doing your best to run this country with a lot of obstacles, Kevin being one of them. I have been very proud of your policy successes and your personal resilience in the face of challenging conditions. But it’s time you realised that your message just isn’t getting through. Sometimes it seems that the electorate and the mainstream media are by default either supporting Kevin’s reinstatement as Prime Minister, or campaigning for Abbott’s election as Prime Minister. This has to change. You have a fantastic story to tell. You just need to stop being so afraid of telling it. I know this is not going to be easy for you to hear, but you could actually learn something from Kevin about how to go about political campaigning. The Labor Party needs an inspirational message. When you speak passionately, you are inspirational. When you told Tony Abbott that you would not be lectured by him about sexism and misogyny, I was moved to tears. I, like so many Labor supporters, would love to see this passion more often. We want to help you defeat Tony Abbott, but first you need to help yourself.

You need to find a way to make up with Kevin. For your own sake as well as his. We know how great you are when you come across relaxed and in control. With Kevin constantly undermining you, it’s no wonder you sometimes appear slightly on edge. It’s time to try something different. Pretending that Kevin isn’t white-anting you isn’t helping. The leadership vote of 2012 was a good idea, but unfortunately it had the unintended effect of fuelling the media’s campaign to force another vote, rather than putting it to bed. So as unpalatable as this might seem, it’s time to be the bigger person and help Kevin. Not for Kevin’s sake, but for the sake of the country. If Kevin wants a ministerial position, give it to him. And then hold a joint press conference and smile, laugh and say every corny thing the mainstream media will love to put on their front page. For crying out loud, give each other a hug! You know they’ll love that!

You both need to agree to get the band back together and then tell the public that you are working as a team to win the election. Admittedly, it is a very sad state of affairs that this country seems to care more about who is in the top job than what the person in the top job is achieving. I’m sick of Labor supporters fighting amongst ourselves about whether we like Julia or Kevin better. It’s like children fighting over a red smarty or a yellow smarty. It’s ridiculous! I know that you know that the Labor Party is more important than the leader. I know that Julia replacing Kevin as Prime Minister is not as big a deal as the mainstream media would like to make it. I know that ultimately the government’s policy successes are the work of the whole Labor Party, as well as often the Greens and the Independents. But after two years and a continuous ground hog day of reporting on this issue, I implore you both to give my advice some consideration. If you don’t, I fear the successes of the Labor government will never be the focus of the electorate’s attention. I fear that the progressive reforms implemented over the last five years will be repealed and destroyed. And I fear that neither of you will ever get the chance to make a difference to this country ever again, and will instead be faced with the worst prospect of all: Tony Abbott as Prime Minister. Please do not abandon us to this fate. We’re counting on both of you.