Which politician is telling the truth? 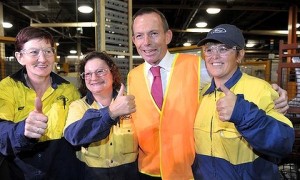 Mainstream journalists’ reporting of politics is broken. In a week in which our first female PM spoke out passionately and convincingly against sexism and misogyny, mainstream political commentators have been lining up to ‘contextualise’ the speech – to lessen it’s importance by explaining it away as part of a narrow political strategy. Their slavish devotion to balance requires them to argue that both sides are as bad as each other. There is a major problem with this strategy however: the truth is very likely to be buried. There are many instances where their attempts to explain away the importance of an event destroy the factual reportage of the story and the resulting analysis.

A good example of this is the coverage of Tony Abbott’s drawn-out campaign to demolish the carbon tax. Throughout this campaign, the mainstream media gave Abbott license to bullshit. They also gave him license to align himself with a group of Australians who hate the Prime Minister, after being whipped into a frenzy by Abbott’s bullshit and Alan Jones’s hysteria. When Abbott stood more than once under the ‘Ditch the Witch’ placards, he crossed from campaigning politician to redneck nut-job Tea-Party-like hero. Did the mainstream media report this significant event? Did any journalist manage to understand its significance? At the continuous door-stop press conferences, where Abbott tried to scare Australians into voting for him by promising that the sky was going to fall, that ‘Whyalla would be wiped off the map’, did any journalist call him out for his blatant fear mongering or his ‘looseness’ with the facts? Did any journalist grill Abbott about his alternative climate change policy? Not that I noticed. Instead, journalists were keen to paint Abbott as a ‘successful’ opposition leader. If success in opposition is earned by negativity, lies and building an atmosphere of nastiness and disrespect, then yes, Abbott is a successful opposition leader. In my view, a successful opposition leader, should, by definition, critique and oppose, and offer credible alternative policies. On these counts, Abbott gets a zero score. Not that you will see any Australian mainstream journalist pointing this out.

So back to this they’re just as bad as each other problem. I’ve already written this week about a few notable myopic accounts of the Prime Minister’s speech, which completely misrepresented the community’s elation at a very important moment in feminist history. There have been more contributions since which have been equally disappointing. Lenore Taylor in the SMH headlined her article on this topic “PMs speech did stir hearts but remember the context”. Taylor claims in her article that:

“If you forgot the context, didn’t over-scrutinise the substance and just saw a powerful woman calling out sexism and saying she had had enough, it was arresting.”

And then, a big BUT:

“…the context that the speech was part of a deliberate, tested strategy of capitalising on the Coalition’s relative unpopularity with women due to Tony Abbott’s political aggression by conflating it with the unsupportable allegation that he actually hates females.”

This ‘context’ that Taylor offers us is the typical misrepresentation of context through the prism of so called ‘balanced’ reporting. Taylor is basically suggesting that Gillard’s speech was part of a strategy that enabled her to support ‘her’ Speaker and to remind voters that Tony Abbott is disliked by some females, and to continue the campaign of the ‘hand bag hit squad’ to influence voters to believe that Tony Abbott is a misogynist, all part of a larger political strategy to stay ahead in the polls and win the next election. Abbott’s support of Alan Jones, in the likes of Taylor’s mind, is also just a political strategy to align himself with Jones’s listeners. David Marr’s portrayal of Abbott’s bullying and intimidatory behavior at university was also written off by journalists as a political strategy to undermine his support with women, even though Marr is a journalist, not a politician. He was reporting facts and other journalists turned it into spin. Labor’s decision to highlight Abbott’s terrible behavior towards women in parliament and beyond, is, you see, all part of a ‘political strategy’ and nothing else. (Never mind how narrow a conception of politics this implies.)

Let’s step out of theses journalists’ ‘context’ for a moment, and instead, look at the context as an ordinary person on the street. And lets throw some facts in as well. Imagine that the female Labor MPs have been reporting on Abbott’s sexist behavior towards them because they are genuinely outraged by it. I am not naïve enough to believe that every word that comes out of a politician’s mouth is not political in some way, but I am also not as cynical as the mainstream media who obviously believe that everything that comes out of a politician’s mouth is political and ‘invented’ for political purposes. The inference in most of the coverage of Gillard’s speech has been this:

Labor is trying to paint Abbott as a misogynist to win votes, but Abbott is not a misogynist. Gillard’s speech was about defending Slipper, not making a stand against misogyny. Nothing happens in politics that isn’t invented for political purposes.

This is absolute crap. Journalists are forgetting that politicians are people too. Sometimes, as on this occasion, when they are upset by something, they explain why they are upset. Abbott’s terrible behavior towards female parliamentarians has been ignored by the mainstream media. And when Labor MPs speak out about it, it is reported as ‘just another political tactic’, rather than fact. Because they’re all just as bad as each other. Gillard’s speech was NOT about Peter Slipper. Gillard has had enough of Abbott’s behavior and her speech contained plenty of evidence that we, as a community, should be outraged by. None of this evidence has been ‘cooked up’ for political purposes. This is the major point that journalists seem to have forgotten. They also have forgotten their own inability to analyse the behavior Gillard, and many Australian women, are so offended by.

So here’s my question for mainstream journalists: what if they’re not as bad as each other? What if Abbott really is the problem? What if Gillard’s speech was just as important to our society as Keating’s Redfern speech and Rudd’s Sorry speech, and you all stood by and missed it? How can we ever respect you again (if we did in the first place?).

Back in April, I came across a very interesting opinion piece in the Washington Post by Thomas E. Mann, a senior fellow at the Brookings Institution, and Norman J. Ornstein, a resident scholar at the American Enterprise Institute. Their essay was based on their book It’s Even Worse Than It Looks: How the American Constitutional System Collided With the New Politics of Extremism.

The article is titled Let’s just say it: The Republicans are the problem and explains:

“In our past writings, we have criticized both parties when we believed it was warranted. Today, however, we have no choice but to acknowledge that the core of the problem lies with the Republican Party.”

You can read the article to see the authors’ explanation of what these problems are, which are all related the Republican Party’s dramatic swing to the right. At the end of the article, the authors have this advice for American journalists

“We understand the values of mainstream journalists, including the effort to report both sides of a story. But a balanced treatment of an unbalanced phenomenon distorts reality. If the political dynamics of Washington are unlikely to change anytime soon, at least we should change the way that reality is portrayed to the public.

Our advice to the press: Don’t seek professional safety through the even-handed, unfiltered presentation of opposing views. Which politician is telling the truth? Who is taking hostages, at what risks and to what ends?”

Are we likely to see any Australian journalist making such a stand any time in the near future? This is highly unlikely, but I can always live in hope.