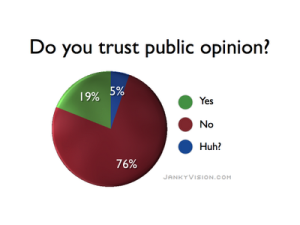 Julia Gillard is going to win the next election. There, I’ve said it. I figure someone may as well make this call, since every journalist in Australia already has the election won by Tony Abbott. But I’m not just saying this because I think the labour movement could do with some optimism. I really believe it. And this is why: Abbott is offering a highly uncertain future for Australians, and uncertainty is our biggest fear.

Last week I read Laura Tingle’s Quarterly Essay – Great Expectations; Government, Entitlement and an Angry Nation. Tingle puts together a very good argument. In a nutshell, she suggests that Australians are happy to live in a free market economy, but we only want the upside of this market and expect government to protect us from the downsides.

Tingle’s theory is that we were convinced of the benefits of globalisation and reduced Government regulation by Hawke and Keating, and once we got over our initial misgivings, we embraced the idea that the market can solve any problem. Throughout the nineties, our free market appeared to be going swimmingly – house prices were rising, incomes were going up and Australian exports helped to grow our GDP each year, making our lucky country even luckier. Tingle argues that throughout John Howard’s era, Australians came to expect to have it all – the benefits of the market and Government handouts for everyone (not just those in need) to encourage us to buy houses, have babies, send our children to private schools and to buy private health insurance.

As McMansions blossomed throughout our outer suburbs, the historic Australian identity of ‘mateship’ and a ‘fair go’ was, in my opinion, replaced with a new identity. Unfortunately this new identity was not born from a collective struggle to improve our circumstances. Howard had encouraged people to believe that their individual freedoms – variously subsidised as above by his government – provided their prosperity, at the same time arguing that government does nothing but drain this wealth that middle class people have worked so hard to build. Government spending was no longer seen as a way to improve the circumstances of our whole society, it was now seen as a way to improve an individual voters circumstances – me, me, me. Our new identity is one of selfishness and short term opportunism. A large proportion of Australians believe that they are entitled to an ever improving standard of living, without them having to make a single sacrifice in their life. Government policy is judged on the premise ‘what’s in it for me’, not on the collective benefits to our nation.

You see this attitude in all policy debates, especially asylum seekers (they came here ‘illegally’ so we have no responsibility to look after them), the carbon tax (climate change isn’t going to affect me in the short term so why should I help pay to fix the problem? It’s much cheaper for me to deny the problem exists) and education and health spending (I can afford private health insurance/private school fees, so why do I care how crappy our hospitals and public schools are).

This new free market toy we were given to play with turned many Australians into self-obsessed, whiny, mean and angry people. Just look at how we react to losing swimming races at the London Olympics. It’s a sad state of affairs. But it gets worse. The comfort that this generation of self-entitled Australians felt with their rising standards of living was suddenly fractured by the Global Financial Crisis. Although many Australians still deny that this crisis happened (since it didn’t affect them, it obviously doesn’t exist), for most, the free market suddenly didn’t seem like such a safe place to be. Superannuation funds disintegrated in stock market crashes, the market for credit dried up and house prices declined. It was clear that our international free market was broken and this is when our society’s irrationality really kicked in. Rather than see the limitations of the market, we blamed the Government. This wasn’t just us either, it was most of the Western World. Many of us had already worked out that markets don’t solve social problems, but it came as quite a shock to most people that markets are pretty crappy at solving economic problems too. Kevin Rudd’s Labor Government, to their credit, took quick and clever action to reduce the effects of the GFC on Australians. Rather than being grateful for this, Rudd was suddenly accused of ‘wasting’ our tax dollars.

So let’s get back to Gillard and the next election. The Australian people have a sense of entitlement, but are now also trying to maintain this attitude in a scary and unstable free market. This makes for a very fearful electorate. We want to see our standards of living on an upward trajectory, we want Government services and a good public health and education system and we want the uncertainty of Climate Change to go away. We want a National Broadband Network, but only if it doesn’t cost us anything. We want our government to solve all the problems in our society, many that come with free markets, yet we want a surplus budget and we want to pay the minimal amount of tax possible.

What can Tony Abbott offer this community? His negativity might be entertaining whilst in opposition (and the media sure love it). But as we get nearer to the next election and people have to start picturing him as their next Prime Minister, they will see a leader who offers only uncertainty. Will he or won’t he scrap the NBN and the Carbon Tax? Will he introduce another version of Work Choices? How will he fund his election promises? If he says no to everything, will I miss out on public services that I have come to rely on? Perhaps Abbott really is a policy flake, since he never offers his own policies, just criticises the government. If we’re doing well now, might this change if Abbott is elected?

To win an election, you need to understand the motivations of swing voters, not just those who are rusted on Labor or Liberal. Tingle’s essay helped me to understand Australian swing voters. People are saying that Julia Gillard has lost, but if any of the above is true, perhaps they are all wrong.